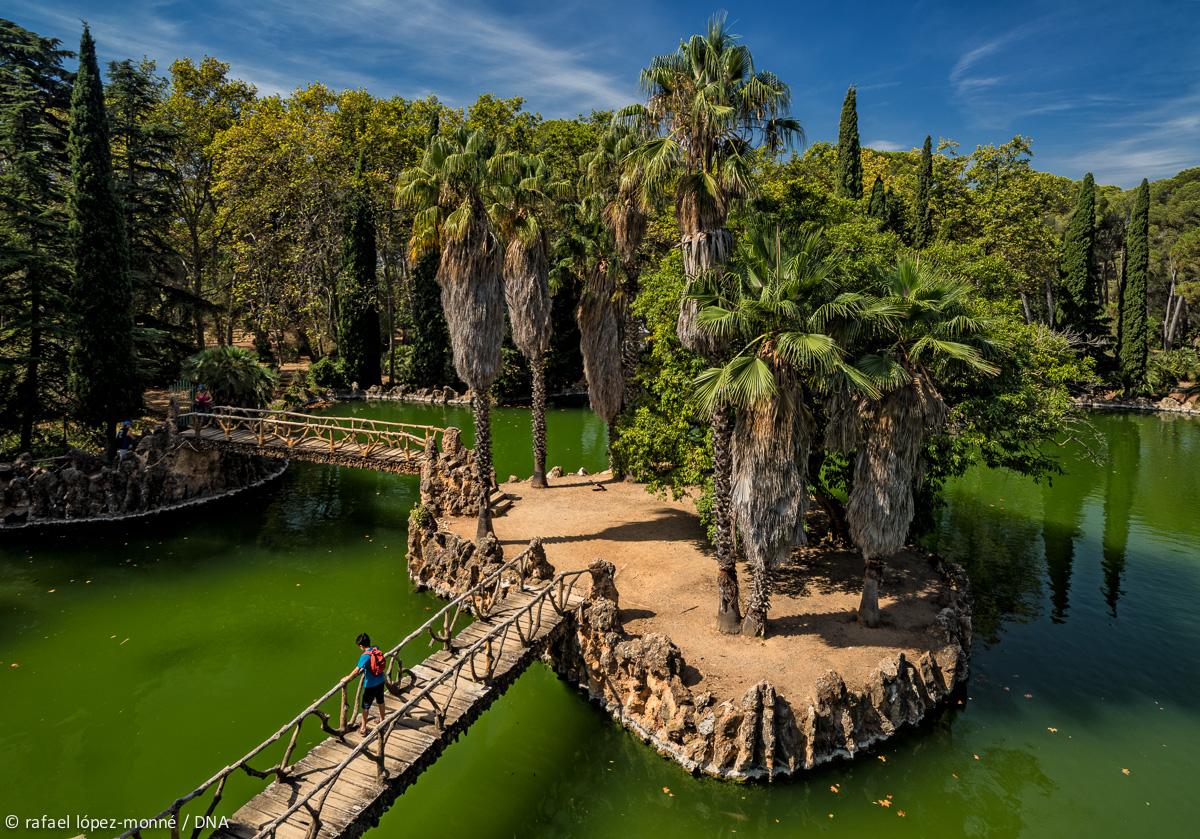 Click on the map to explore all that Parc Samà offers:

They form the most attractive part of the area and represent the centre of gravity of the entire historical complex. In the lake, there are three islands linked by bridges that imitate wooden logs. On the central island, there is a mountain built with large rockery that forms a grotto with a jetty inside.

The grotto-jetty at Parc Samà follows the guidelines and the model of other grottoes of English typology, especially the one created by Hamilton in Painshill, Bristol, throughout the 18th century.

Grotto of the taxodium

After the lake is the Grotto of the Taxodium, whose access is limited. A long dark corridor allows the exit to the Forest. Also made in a rockery, it is located next to one of the bridges that allow circulation through the back garden. This is the only bridge in the entire Park that in its time had an internal hydraulic system that allowed water games.

Grotto of the Taxodium

Fallow deer is a species native to the Mediterranean region: southern Europe, the Middle East and Asia Minor. It is a medium-sized deer: smaller than deer and larger than roe deer. The fur of the adults is reddish, with white spots in summer and greyish in winter.

Males are larger than females and have shovel-branched horns that are renewed every year between March and April. From October to early November, the rutting period occurs, known as the ronca.

Delve to admire, enjoy and understand the wonderful world of exotic birds closely. The Marianao Aviary is conceived to immerse the visitor in the world of exotic birds, recreating the sensation of being in the tropical jungle. Built on the base of the old deer enclosure, the aviary is eight meters high and includes vegetation and waterways.

The aviary also has the vocation of being a powerful tool for social awareness of environmental problems, the conservation of endangered species and scientific research.

The macaws are a genus of birds of the family of parrots, Psittacidae, of the order of the Psittaciformes. It comprises 16 species, nine of them extinct. They are very large birds that can measure up to 90 centimetres and weigh up to 1.5 kilograms. They have a colourful and bright plumage. Its beak is large and robust, being able to quickly break the nuts’ husks. They have a bone placed in the tongue, which makes it an excellent tool to hit. They can live for an average of 80 years.

Its habitat is the tropical forests of Central and South America and feeds on insects, berries, fresh fruit and grains. The macaws have a docile, affable and easily domesticable character; they are noisy, playful and can reproduce words. It is a group of birds very threatened by the beauty of their plumage and intelligence; illegal traffic for sale as pets has become one of its main threats. The destruction of their habitats and insufficient legal protection in some countries are united to this. Some of their species are in a critical state of conservation, like the hyacinth macaw.

For this reason, many of the species of macaws are included in the Convention on International Trade in Endangered Species of Wild Fauna and Flora, better known as the CITES Convention, to preserve them by controlling their trade. These species of macaws are born and bred in captivity through a breeder accredited by the S.O.I.V.R.E. administrative authority for the correct application of CITES.

The monkey house is the most representative building of those destined to house the original private zoo. The Marquis of Marianao built these habitats and cages around the botanical area with the same materials as the rest of the facilities, with limestone and hiding the gripping elements with iron sulphate in the style of 18th-century waterfalls.

The amazons are a highly endangered species due to deforestation and the illegal capture of young individuals for their trade. Some of them, like A. Auropilalliata or A. Oratrix, are in a vulnerable state of conservation or in danger, respectively, according to the evaluation of the I.U.C.N. Red List of Threatened Species, which is the most complete inventory of the state of preservation of animal and plant species worldwide.

The list is prepared by the International Union for the Conservation of Nature (I.U.C.N.), the world’s leading authority on the subject. For this reason, these species are included in the Convention on International Trade in Endangered Species of Wild Fauna and Flora, better known as the CITES Convention that seeks to preserve the conservation of threatened species of wild fauna and flora controlling their trade. These species of amazons are born and bred in captivity through a breeder accredited by the S.O.I.V.R.E. administrative authority for the correct application of CITES.

The cooperation between conservation organizations improves the protection of wildlife and contributes to the conservation of the planet’s biodiversity. At Parc Samà, as a zoological institution, we collaborate with diverse plans of conservation and reinforcement of the population of species loomed.

We are part of the Conservation of the Mediterranean Turtle (Testudo hermanini) Project, a species in danger of extinction, along with the Centre of Recovery of Amphibians and Reptiles of Catalonia (CRARC) and coordinated by the Territori i Sostenibilitat Department of the Generalitat of Catalonia.

Since 2013, we have participated in the breeding project of Golden Pheasant, Chrysolophus pictus, adhered to the European project EP5000 and the European Studbook, ESB., promoted and organised by the EAZA, European Association of Zoos and Aquaria.

Since 2020, we have collaborated with Galanthus and the Barcelona Zoo Foundation in the reinforcement project of the wild hedgehog population.

This 350 m2 greenhouse was built in the old riding arena building where riders and horses trained, the great passion of the park’s founder, Salvador Samà y Torrens.

It is home to more than 75 species of palm trees and other tropical trees, among which are two specimens of Roystonea regia, the royal palm, the national tree of Cuba; a specimen of Dypsis decaryi, a strange triangular palm native to the rainforest of Madagascar; and two Ravenala madagascariensis, known as the traveller’s tree of the Strelitziaceaemas family.

Parc Samà, like most of the romantic gardens, had a greenhouse, but it was destroyed in the civil war. The new facility aims to enhance the bucolic atmosphere of the historic park, offering visitors an immersion in a tropical environment that will allow them to isolate themselves from the outside environment, following the principle of prioritizing feelings, typical of romantic gardens.

Open from june to mid-october.

A labyrinth themed with the 17 Sustainable Development Goals, with which the park wants to collaborate in the dissemination of the UN master plan to achieve a better world by 2030.

Each of the 17 islands that compose it is dedicated to a goal where visitors will find questions and advice, one for each objective, having to complete the transit through the 17 islands to leave. In this way, the labyrinth contributes to spreading the SDG in an entertaining and fun way and to raising awareness about the importance of the small actions of each day to end poverty, protect the planet and build a better world, thus joining the initiative of the UN “Make change possible”.

Located next to the SDG Labyrinth, our lavender field blooms between late spring and early summer.

Also called Torre Angulo, it is built on a cliff or masonry mountain and reaches a height of 24 meters. The mountain is hollow inside, forming a dome like a romantic grotto. The tower has a classically medieval shape: Round floor, frustoconical section and upper platform with battlements.

Its original conception obeys the albarrana tower model, since it starts from a closed area and communicates with the rest from the round pass. The dome breathes the style of Antonio Gaudí, who endowed this type of interior spaces with special dynamism.

The canal supplies the lake with water and is born from an artificial cave also made of rockery, located in the northeast corner of the closing wall. The water comes from a 5 km long underground mine specially built for this purpose. The grotto forms a cascade of water dressed with different palm trees, moss and fern, whose green tones contrast with the range of brown-ocher rockery.

The interior of the cave is a clear example of the construction technique of Antoni Gaudí, who gave special importance to the balance between functionality, beauty and symbolism. His vision reminds us of the catenary arches of the Güell crypt and its chromaticism, perfectly integrated into nature, of the Can Artigas gardens.

The last of the caves in Parc Samà is the one that functions as a viewpoint of the forest, and is attached to the northwest of the closing wall. It is surely the darkest of all the caves in the enclosure, even despite having a balcony and a small opening in its front part, so its interior could never be covered with vegetation.

The residence of the Marquesado is a large building of about 1,100 square meters, with miscellaneous, ornamental details (baroque, rococo, medieval) finished with solid dependent roofs.

Behind the palace, the central garden is distributed from a small square dominated by a second cast-iron fountain of French origin.

It is not possible to access the interior of the palace house.

Around the palace house

This ceramic vase from the s. XIX, enamelled in various colours and decorated with oriental-style floral and faunal motifs, comes from Vichy (France).

Made with natural shells and large specimens of sea shells, it presides over a small square. Arranged on a rockery base, it is crowned by a spout needle.

Behind the palace, the central garden is distributed from a small square presided over by a second cast-iron fountain-fountain of French origin.

Heracles personify the triumph of courage and courage of the hero. Son of Zeus and Alcmena, one of his tasks was to hunt the Lion of Nemea. In this sculpture, he is represented victorious, leaning on a mace from which the lion’s skin hangs, exhausted, with his right arm behind his back.

This sculpture of Heracles appears to be a copy of the Farnese Hercules located in the Archaeological Museum of Naples. It is located in the lower part of the old parrot pavilion, built on a rockery cave.

We believe in sustainable & responsible tourism

We protect memory, heritage & the environment

We are Committed to the Sustainable Development Goals

Parc Samà is recognized with the Family Tourism Seal

HOW TO GET HERE

Thank you for keeping the memory